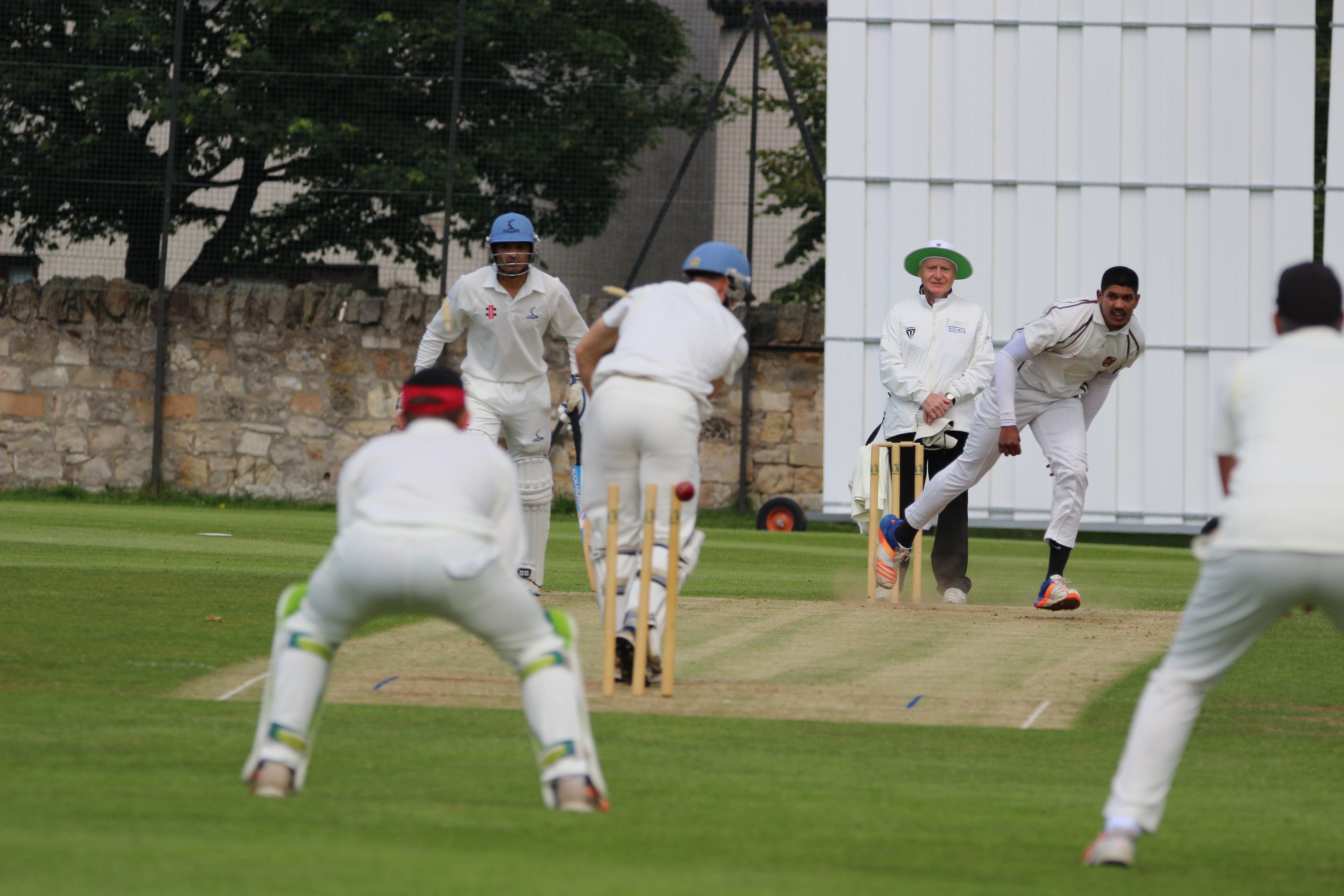 The 1st XI suffered their first home league defeat of the season losing to Carlton by 65 runs. In terms of some recent results against Carlton this represented some improvement tinged with some disappointing aspects.

Carlton won the toss and elected to bat on a day when the Saturday weather was the best since our friendly match at Stirling in April. Before the match Stew Mel suffered a blow when in form opening bat Kyle McCallum was forced into a late call off due to a bug and was replaced by Euan Campbell who was due to play in the 2nds.

That Carlton scored 235 was in large measure attributable to some sloppy bowling and fielding – 40 extras being conceded (Carlton’s top scorer !) including 32 wides from 15 balls called by the umpires. On this occasion all the bowlers were guilty to a degree. On the positive side wickets were taken regularly and while four batsmen got into the thirties none went on to a big score. Shaylen Pillay was pick of our bowlers with two for 15 runs off his ten overs bowled straight off. Hayden Sweet took three wickets with his off spin but conceded 61 runs in his ten overs.

The Stew Mel reply matched Carlton’s for 24 overs, 83 for 3 against Carlton’s 78 for 3, Michael Miller (24) and Ben Wilkinson (15) being second and third out to identical shots caught at mid off by Raza bowled by Scotland pace bowler Ali Evans. In the next over Hayden Sweet was run out by the proverbial mile and Patrick Ritchie was out lbw first ball and although decent contributions with the bat came from Shaylen Pillay (21), Steven Parker (30), Greg Ruthven (25) and Andrew Wallace (21) we never threatened Carlton’s total.

In other matches on Saturday there were wins for Stoneywood Dyce over Watsonians and Arbroath over league leaders Forfarshire by 1 run results which demote us to ninth place in the league but still two wins ahead of Aberdeenshire. Next Saturday we have an important match away to Stoneywood Dyce but holidays and family commitments seem likely to reduce availability. 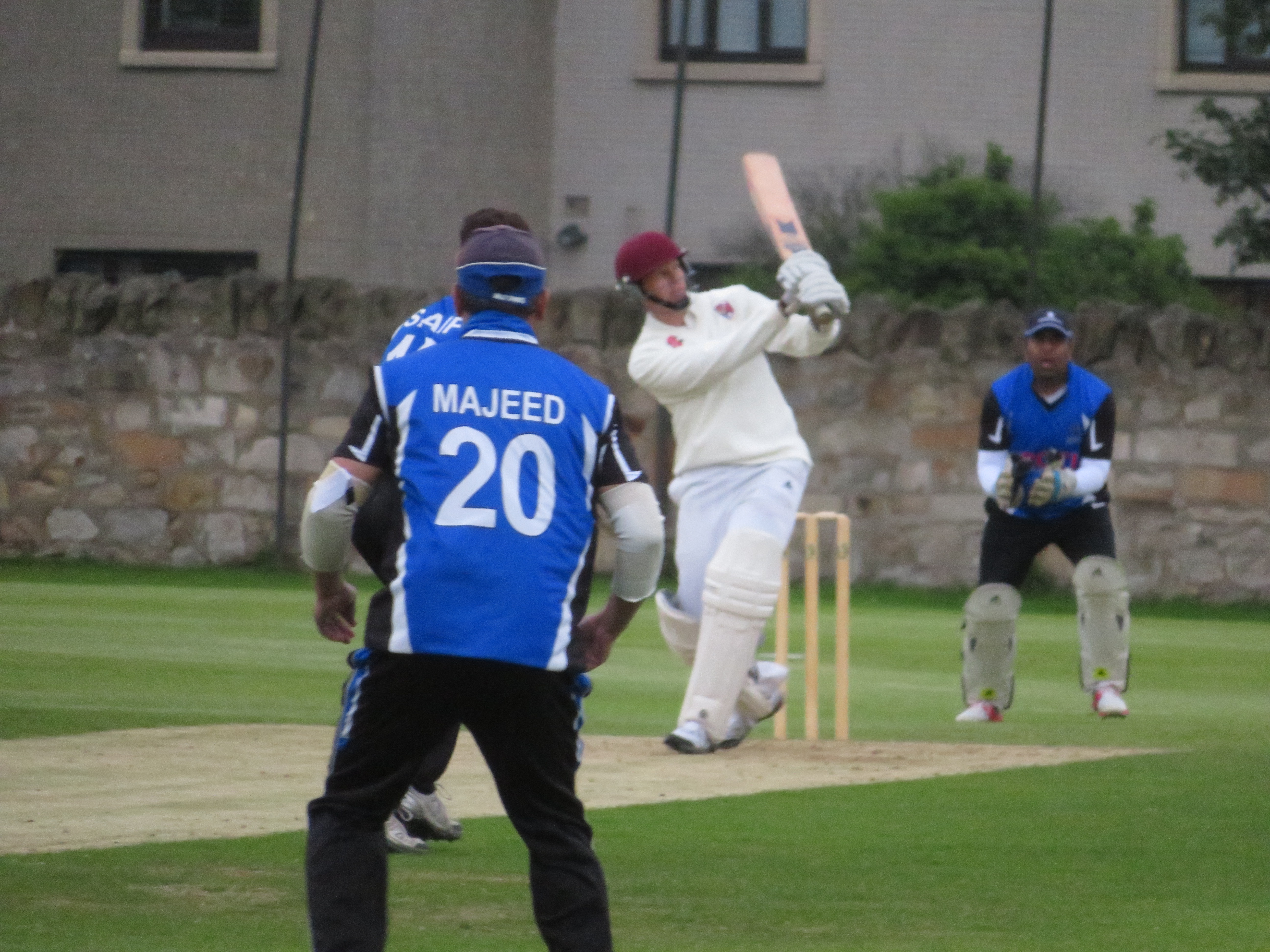 Our 1st XI finished the group stages of this year’s Masterton Trophy with an emphatic win over Championship leaders Edinburgh CC at Inverleith.

Edinburgh won the toss and chose to bat first under grey skies and a draughty wind from the West. It was no surprise that they set about matters in their usual aggressive batting style and Shaylen Pillay’s four overs for just seven runs was perhaps lost ion the onslaught suffered by others. All four Edinburgh bats we saw had some success with Qasim Ashraf who remains familiar from our days in the Championship striking an unbeaten 53 in double quick time to give Edinburgh a very respectable total of 139.

Ordinarily 139 might have appeared quite a challenging total but on this occasion both openers Kyle McCallum (62 not out) (pictured above) and Mikey Miller (41) were up to the requirements each playing in the manner their talents are capable of in an opening stand of 77 with Ben Wilkinson continuing in the same vein with 29 not out so that a nine wicket win was wrapped up in 16 overs without even Shaylen Pillay and Hayden Sweet being required.

The win gives us a record of four wins and three defeats and on the verge of qualifying for the play-offs. Whether this is achieved or not depends on whether Corstorphine and Grange rearrange a cancelled fixture from early in the competition and the outcome if a re match goes ahead.