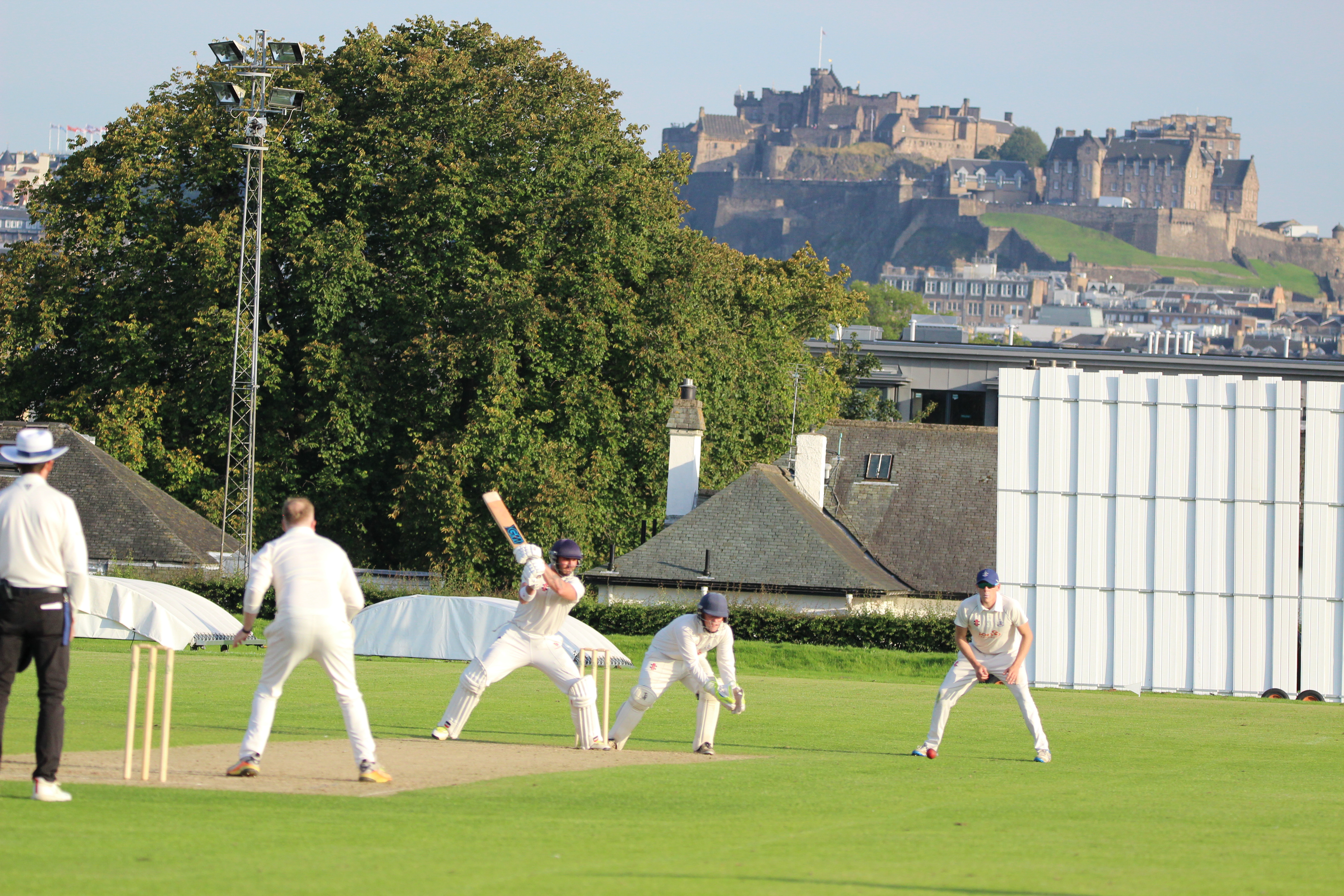 The weather for the last league game of the season was for maybe the first occasion as good as could ever be hoped for, sunny, hot and no wind to speak of.  Our visitors, Forfarshire, had secured the championship for the first time last week and seemed in celebration mode throughout  fielding their very strongest team.  No surprise then when Forfarshire won the toss and chose to take the opportunity of showing off their batting prowess.   To the surprise of the few onlookers  by the eighth over Forfarshire were three down for 27 runs, Chris Greaves, Roy Johnston and Umar Mohammed having fallen to Shaylen Pillay and Andrew Wallace.  Given their batting strength all through their line up the confidence of the visitors was not diminished and their middle order led by current Scotland star Michael Leask who piled up 128 runs (18x4s; 2x6s) for himself took their score beyond 300 before they lost their final two wickets being all out for 309 which ordinarily would look far beyond  Stew Mel’s capabilities.   To capture all ten wickets was an achievement in itself  but for the first time this season all four of our slow bowlers were scored off heavily.  Shaylen Pillay had the best figures with 2 for 25 off 8 overs, Andrew Wallace finished with 3 for 48 off 9 overs. 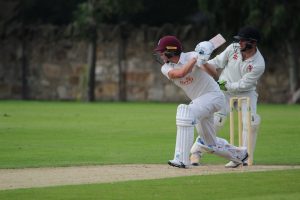 Facing such a large total there was disappointment among home ranks when the normally quick scoring Kyle McCallum was out in the first over to the pacey Scott Cameron for 2.  Greg Bissett and Kris Steel then held out against the visitors attack into the 16th over taking the score onto 36 when Kris was bowled by Umar Mohammed for 17 followed quickly by Greg Bissett out lbw for 14  to Brock Ditchman.  By then the required run rate was an unlikely 7.6 an over and while not achieving that there followed an excellent partnership of 88 in 102 balls between Shaylen Pillay and Hayden Sweet (45 with 4 fours), Shaylen went on to score 62 off 83 balls with 9 fours before eventually being seventh out lbw to Michael Leask’s off spin chasing quick runs with the score then on 172 with 3 overs left.   In a disappointing end to our innings we lost the last three wickets for the addition of only five more runs being all out when Sam Tait was comprehensively run out off the second last ball of the innings.  In truth we were never likely to match Forfarshire’s Leask inspired scoring rate which would have been beyond most teams in the league.

Our final league record was 3 wins and 9 defeats leaving us in ninth place for the third successive year but two wins better off than relegated Aberdeenshire.   We were perhaps a little unfortunate in that of our six no result matches five of these were against teams in the lower part of the league where we would have had hopes of success.   Reaching the semi-final of the midweek T20 competition including wins against Grange, Watsonians and Carlton was a pretty good outcome but the season will be most remembered for its miserable weather and the number of cancellations. 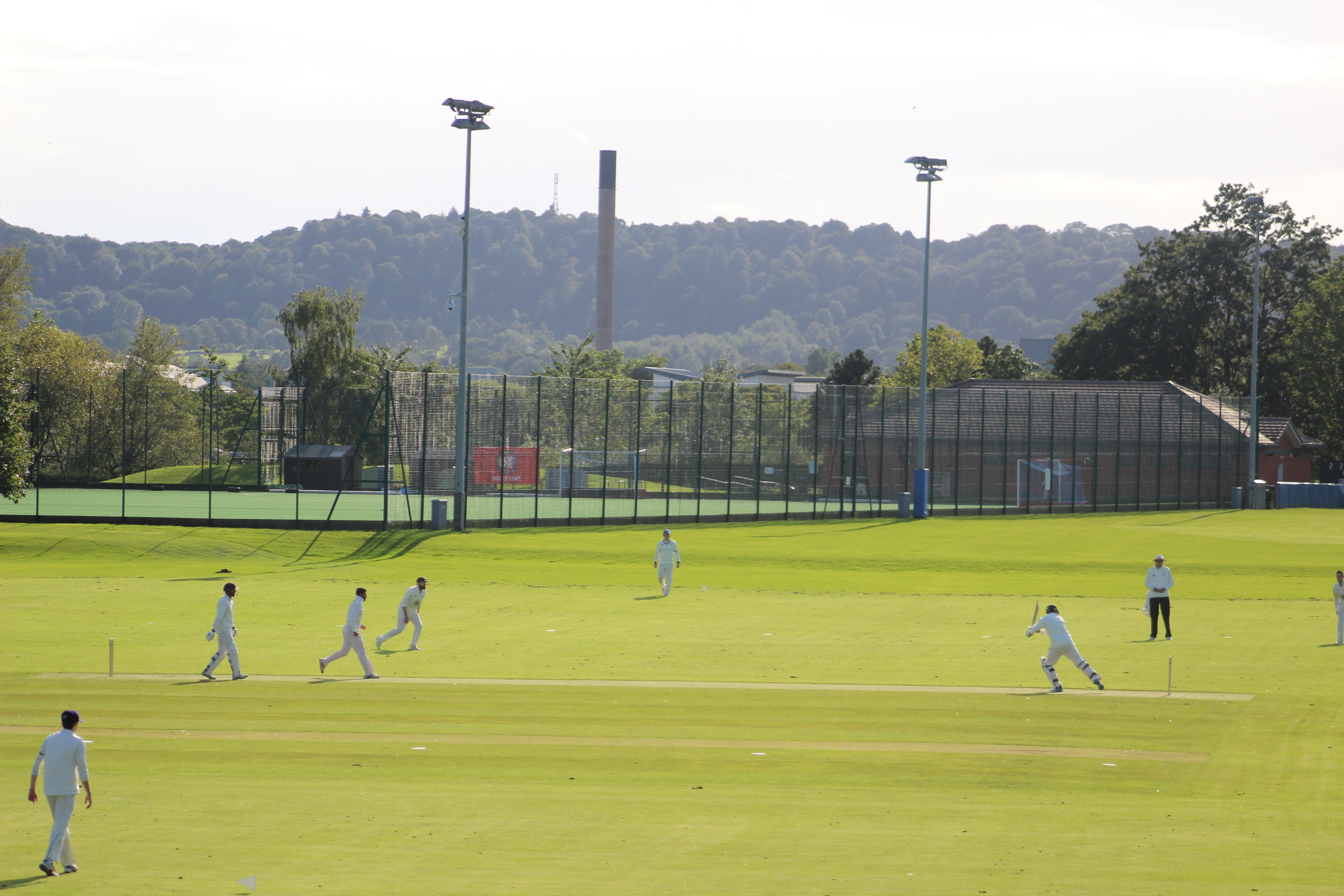 Photo – Before the rain

The league rules allow games with a scheduled 12 noon start to be played 20 overs a side beginning at 4.50pm and on Saturday that is just what happened after much inspection and faffing about around the run offs at each end of the square. There was not really any doubt that the prepared pitch was playable.

RHC won the long delayed toss and chose to field. For Stew Mel Shaylen Pillay was promoted to top of the order opening with Mikey Miller with Ben Wilkinson coming in at no 3. Both openers started with the admirable intent of putting early runs on the board although the soft outfield made run scoring difficult.   After Mikey was out for 9 with the score on 24 Shaylen who eventually made 52 (3 sixes) continued to show aggression and was well supported by Ben who made 40 (3 fours and 2 sixes). Together they took the score to 107 (16.5 overs) before Shaylen fell to another attempted boundary hit. RHC’s tactic of holding back Majid Haq for the last overs captured the wicket of a Hayden Sweet for 3 and after Ben was out in the next over Greg Ruthven and Kris Steel contrived ways of pushing the score onto 121 without a boundary between them. In the circumstances 121 seemed a very competitive score if slightly less than seemed achievable when Shaylen and Ben were together.

Stew Mel saw the key to a first win of the season against RHC being the wicket of pro Mohammed Saad who has been a particular thorn in the flesh this season. In the event as so often this season the weather won again.  in the fifth over with RHC on 24-0 mostly due to Saad  and just as the sun broke through the cloud cover and was still shining down a monumental rain storm descended from the clouds which appeared to have passed by and comprehensively ended proceedings for the day. With the necessity of 20 overs being possible before 7.40pm no longer an option that was that – another no result.

As a consequence of no play being possible in the match between Aberdeenshire and Stoneywood Dyce, Aberdeenshire’s bottom place and relegation for next season was confirmed.  Our opponents of next week Forfarshire won the league with a comprehensive win over Carlton.

The match with Forfarshire has a 1pm start. 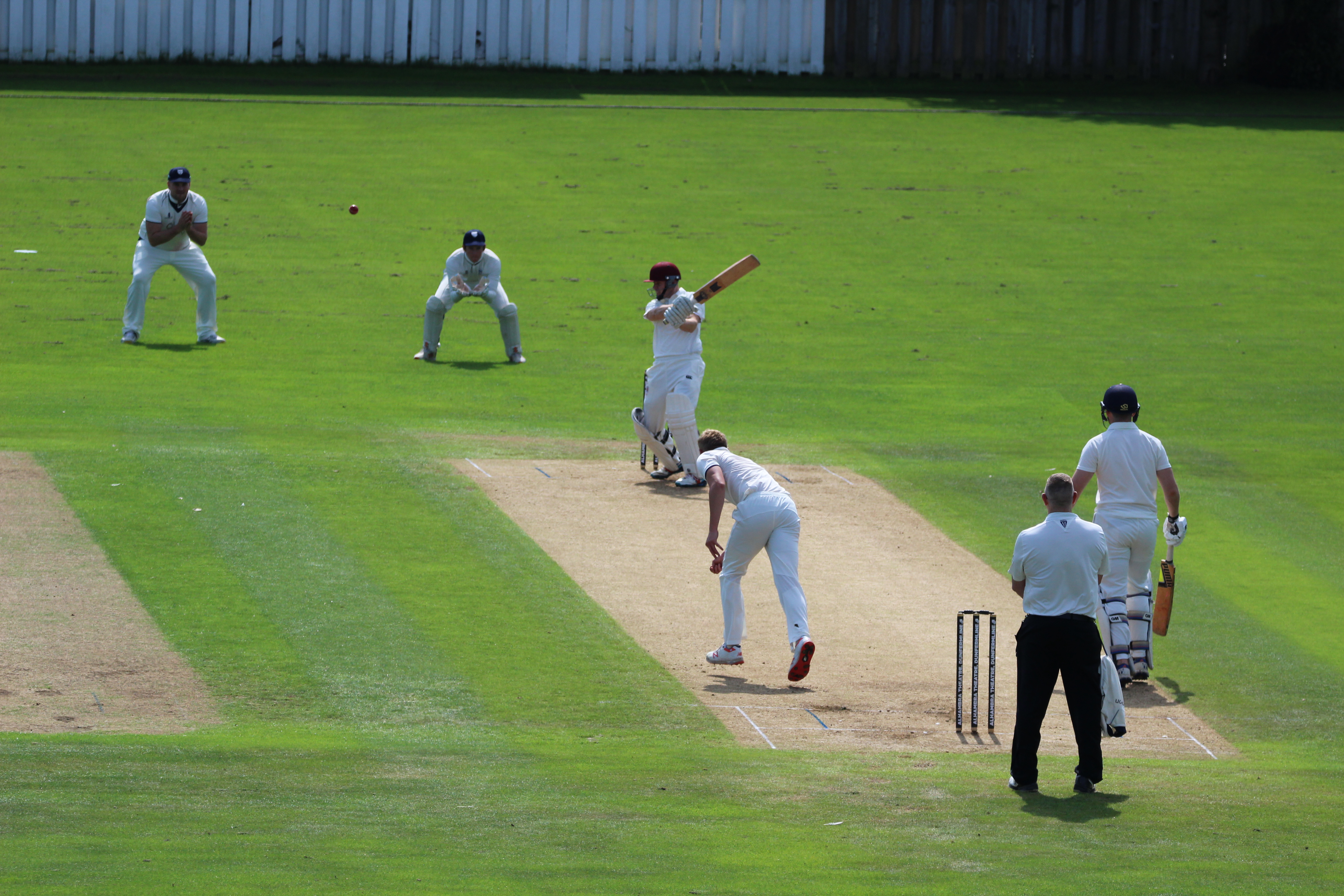 After last week’s weather cancellation the 1st XI resumed their East Premier League campaign against Heriot’s at Goldenacre having won the first match earlier in the season.

Captain Steven Parker won the toss and chose to bat first despite having won the first match batting second. Kyle McCallum (18 runs) and Mike Miller (20 runs) started profitably against the pace bowling of our former player Elliot Ruthven and Joe Kinghorn-Gray, ex RHC putting on 30 runs before Kyle stranded out of his ground was bizarrely run out by Hayes van der Berg after he had failed to take an overhead catch at mid off. Ben Wilkinson followed caught low down in the same position off Kinghorn-Gray with the score on 41. Shaylen who replaced Ben at the crease started confidently the score quickly moving onto 63 before he was caught behind for 15 off the bowling Michael Shean who had replaced Elliot Ruthven. The slow bowling combination of Shean and Scotland and Derbyshire player Mark Watt then appeared unplayable on a helpful wicket as we slumped to 77 all out with five of our bats failing to score.

Given the success of Heriot’s slow bowlers we opened with Greg Ruthven and Hayden Sweet with Kyle McCallum replacing Sweet after one over. Heriot’s reached 23 without loss and seemed on their way to a comfortable win when the pursuit of runs against a turning ball resulted in a succession of wickets so that the score became 44 for 5 and Stew Mel hopes of achieving something special were raised. Hayes van der Berg (55 balls for 19 runs) and Keith Morton (34 balls for 8 runs) then chose to pick their shots carefully so that after 26 overs Heriot’s achieved the anticipated win leaving Stew Mel to wonder how many more runs might have tested the home side more. Greg Ruthven bowled his 10 overs straight off taking two wickets for just 20 runs with Kyle McCallum one for 17 off seven overs and Sam Tait two for 27 off 8 overs making things difficult for the Heriot’s batsmen.

We have three Saturdays to go in the league season with home games to come against Watsonians, RH Corstorphine and league leaders Forfarshire. Aberdeenshire remain in the relegation spot two wins behind us.