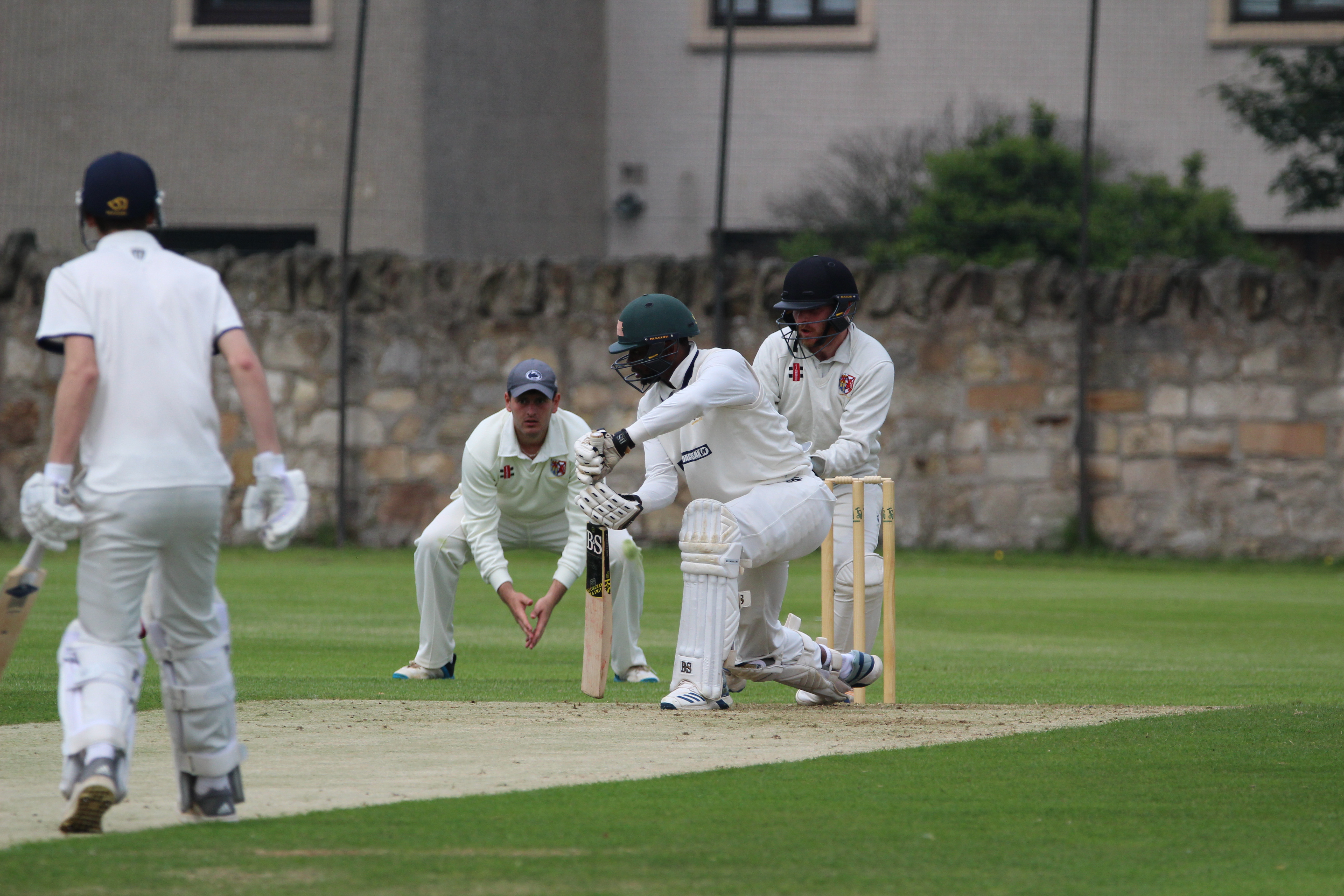 The 1st XI won Saturday’s important East Premier League match against Aberdeenshire on the Duckworth Lewis Stern (DLS) system for determining results where the weather intervenes. That they did so was down to a window between two thunder and lightning storms which allowed our innings to reach the critical point of twenty completed overs having earlier come off the field after eighteen overs.

Stew Mel won the toss with captain Steven Parker choosing to bowl first in hot sunshine but with the weatherman predicting possible change later in the day.

In the event while the weather seemed the critical element the success was based on a sound bowling performance with only ‘Shires professional Sinesipho Nqweni of the East Province team in South Africa and Ian Kirk who came together at 15 for 3 producing much of a batting threat. Indeed Nqweni gave something of a master class in batting being last out on 59 as ‘Shire succumbed to 135 all out in 47.4 overs. Eight Stew Mel bowlers were utilised all bowling with economy. Greg Ruthven’s ten overs cost only 16 runs and included Kirk’s wicket. Hayden Sweet introduced as our sixth bowler captured four of the last five Aberdeenshire wickets for 22 runs. Notably, Ben Wilkinson (eight overs for 20 runs) and Greg Ruthven didn’t concede a wide between them.

136 should have been a gettable score in 50 overs even on a slow pitch but given the importance of a win to both sides there was a certain nervousness among supporters but possibly as much attention was being paid to the darkening skies as the Stew Mel batsmen set about the task with Duckworth Lewis very much in mind. ‘Shires overseas amateur, Callum Mackaness pretty much destroyed our batting in last year’s Mannofield match with quickish left arm bowling but came into this match carrying an injury and bowling off a much shorter run up with less pace. He still captured the wickets of Mikey Miller (14) and Ben Wilkinson (1) both lbw but with Kris Steel grinding away at the other end 25 had been scored when Shaylen Pillay came in at number 4. Between them Kris and Shaylen put us comfortably ahead of the DLS requirement but with thunder and lighting seemingly coming closer the concern was that we wouldn’t reach the critical point of 20 overs and so it proved when the umpires took the players off at the end of the 18th over with the score 73 for 2 well ahead of Duckworth Lewis.

After approximately half an hour’s break and with the skies apparently clearing and the light much improved the game resumed so that the essential two overs were bowled to take the game into result territory. No sooner was that attained than Kris Steel lost his wicket to Kirk, bowled for 34 with the score 76 for 3 – but still well ahead on DLS. At this point the thunder and darkness returned followed by a monumental thunderstorm of some duration so that the umpires decision to terminate play became inevitable as the ground disappeared under large pools of water. The win we wanted so much was achieved and on the cricket played well deserved – notwithstanding there was an element of good fortune involved the celebrations started. With three league wins (100% at Inverleith) we have climbed to seventh place in the league – next Saturday it’s Carlton at home again (12 noon start). 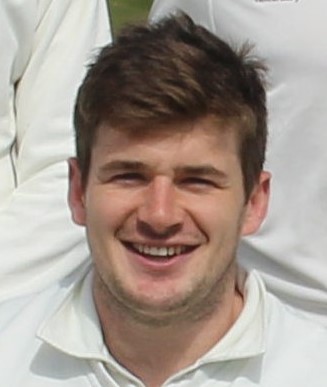 Above – Mickey Miller and Ben Wilkinson

In last night’s Masterton Trophy T20 match at Inverleith  opponents Corstorphine came to the final over still needing 11 runs to win after a combination of slow left arm bowling from Kyle McCallum and Sam Tait ( both  restricting RHC to 16 off 4 four overs) and Callum Steel’s medium pace (3 overs for 7 runs and the wickets of Ali Khan and Majid Haq) )  pulled Stew Mel back into a match winning situation.

Corstorphine had raced ahead of the required run rate scoring 16, 10 and 12 off overs four, five and six with Corstorphine’s Pakistan A professional Mohammed Saad and Jacob Wood at the crease.  Saad who  batted throughout the RHC innings then showed a degree of restraint after his early flourish  until he changed to big hit mode for the last over and hit  a six and two fours off Shaylen’s first three balls to bring the match to a sudden conclusion.

Batting first after stand in captain Mikey Miller won the toss put up a respectable total of 116 against the same bowlers who had caused some havoc in the recent league and Scottish Cup matches.   The bulk of our runs came from Mikey Miller (43) who opened the batting with Kyle McCallum, Ben Wilkinson (39) at number 3 and Hayden Sweet (21) at number 5.  Ben’s innings of 32 balls  included four 4s and a six before going lbw in the 18th over.

Overall it was a good competitive game of cricket although the final outcome proved disappointing.

Our last match in the round robin qualifying is against Edinburgh CC, leaders of the East Championship next Thursday at Inverleith.

This Thursday sees our next Masterton Trophy match against RH Corstorphine at Inverleith with a 6.15pm start. The bar will be open – do come along